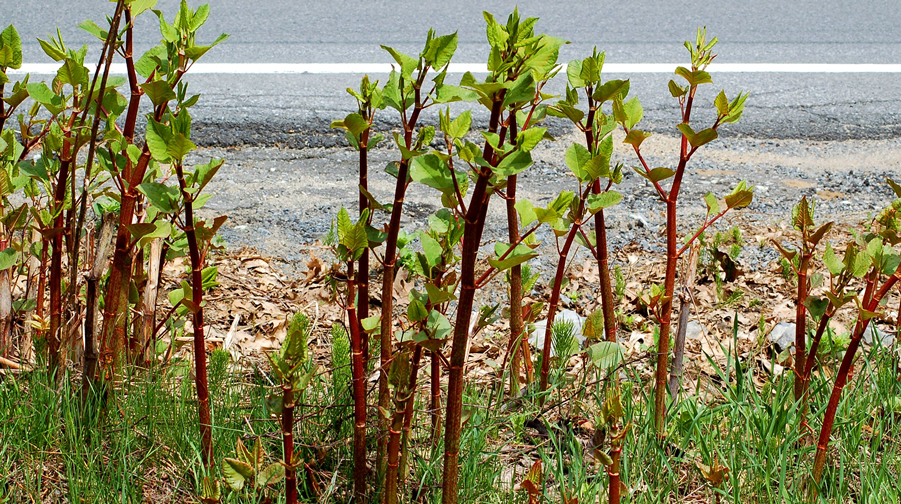 The problem of Japanese knotweed

Japanese knotweed may have originally been brought to Britain as an attractive new species but it is not a feature anyone wants in a property for sale. It’s estimated that between 1% and 5% of homes in this country are affected but there are ways to deal with this problematic plant and even secure mortgage finance.

What is Japanese Knotweed?
Although rather attractive, Japanese knotweed (Fallopia japonica) is a real thug as it spreads rapidly, growing vigorously from year-to-year (perennial). It is a highly invasive plant which thrives around water sources such as ponds, canals and lakes, as well as along railway embankments and in large open spaces.
In winter the plant dies back beneath ground but by early summer the bamboo-like stems shoot to over 2.1m (7ft), suppressing all other growth. Eradication requires a steely determination as it is hard to remove by hand or with chemicals and new legislation now covers its control.

Why is it such a problem?
Japanese knotweed can cause structural damage to homes and other buildings. It pushes through cavity walls and drains, and up through asphalt, cracks in concrete and driveways. It can also cause significant delays and costs to building development.
When the plant invades natural habitats (often through fly-tipping), it out-competes and smothers other plants and animals that usually live there. It clogs up routes used by wildlife and takes up precious space along rivers and around hedges and roadsides. Once it takes hold, Japanese knotweed is extremely difficult to eradicate.

Thinking about buying/selling a house, but worried about Japanese knotweed?
If you think a potential property you want to buy might have a Japanese Knotweed issue it’ll pay to get a complete Survey done to see what can be done. If your fears become true then the next best step would be to bring in a specialist who can fix the problem before you sell your property.

Can you get a mortgage on a property with Japanese knotweed?
So long as a qualified surveyor has identified the knotweed, provided a report and a Japanese knotweed management plan (which includes an accurate record of the infestation and how it is to be eradicated) is in place, it is possible to get a mortgage.
Most lenders are happy to lend on a property where Japanese knotweed has been found in the past, so long as there has been a course of treatment and a certain amount of time has lapsed. Much depends on the valuer’s comments and proximity of the knotweed to the property.
If you are planning on selling, you may want to deal with the problem before putting your home on the market.

Will I get into trouble if it is growing on my property?
If you don’t take the necessary action, yes. You could be fined up to £5,000 or be sent to prison for up to two years if you allow contaminated soil or plant material from any waste you transfer into the wild.
However, the Royal Institution of Chartered Surveyors (RICS) says that the most active area of legal action is civil litigation, where one party seeks financial damages from another. This is because knotweed can decrease property prices by up to 20%.
Do I need to tell the authorities if I discover it?
It’s not illegal to have Japanese knotweed in your garden. But, it is your responsibility to control it and prevents it from becoming a problem in your neighbourhood.
You may need to contact someone officially when it comes to getting rid of it too.
What is the Government doing about the problem?
The plant was included in the Wildlife and Countryside Act 1981, making it an offence to, “plant or otherwise cause Japanese Knotweed to grow in the wild.”
The Government also amended the Anti-social Behaviour, Crime and Policing Act 2014 to include Japanese knotweed. This means it’s now possible to get an ASBO if you allow the plant to spread from your land onto your neighbours’.
Find a Branch
or see our service areas