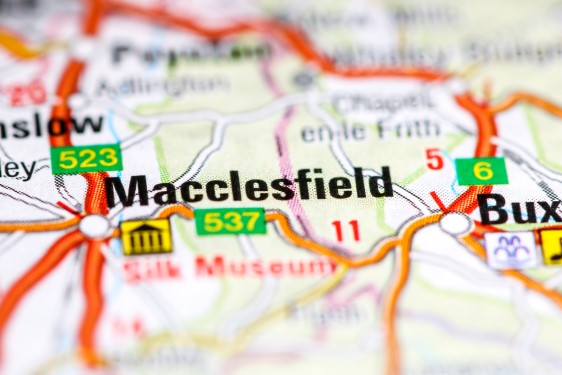 Macclesfield is a market town and the civil parish of Cheshire lying east of Cheshire on the River Bollin, it is close to the county borders of Greater Manchester to the north, Derbyshire to the east, and Staffordshire to the south. It is near the towns of Stockport to the north, Buxton to the east, and Congleton to the south. It is 38 miles (60 km) to the east of Chester, the county town of Cheshire. To the west of the town lies the Cheshire Plain and to the east lie, the hills of the Peak District. Like many areas in Cheshire, it is a relatively affluent town and some living in Macclesfield can be referred to as a ‘Maxonian’.

The town is recorded in the Domesday book as ‘Maclesfeld’ and in 1183 it was referred to as ‘Makeslesfeld’. Although now a much updated nickname if ‘Silk Town’ is preferred and the traditional nickname of ‘Treacle Town’ which refers to a historical incident when a horse-drawn wagon overturned and the load it was carrying which was treacle spread onto the streets.

Macclesfield is listed as one of the top 10 happiest places to live in the North West Rightmove annual survey. The happy home index asks homeowners in the area to rank the 12 happiness factors. The 12 factors range from how safe people feel and how friendly the neighbourhood is to how good the services and the quality of green spaces and cultural activities are.

The town is famous for its once-thriving silk industry, which you can visit and find out more information about at the Silk Museum on Park Lane. Silk has been woven into much of Macclesfield’s identity as you will see from the many mills and warehouses that have survived over the years. The many silk stories which shaped a lot of lives within the town also paved the way for the town to become a piece of unique history. From the humble button making to the silk looms of Paradise Mill which the Association for Industrial Archaeology has funded the restoration of two demonstration Jacquard handlooms.  By keeping the handlooms restored allows for the many visits to see them in working order and to keep the history alive for the museum.

A railway station was opened at Beech Lane by the London and North Western railway in June 1849 and replaced a month later by Hibel Road Station. The current station dates from the modernisation of the West Coast Main Line in the 1960s when the old station buildings were demolished to make way for new buildings.

Macclesfield is on the Stafford to Manchester section of the West Coast Main Line. Macclesfield railway station has frequent services to Manchester Piccadilly (25 minutes away), Stoke and London Euston (1 hour 47 minutes) by Virgin Trains, and to Birmingham New Street and beyond provided by CrossCountry. Northern’s stopping service between Manchester and Stoke calls at Macclesfield.

Macclesfield is also served by great road links from the north, south, and west, but has fewer roads going east due to the proximity of the Peak District. From the south, access from Congleton and the Potteries is from the A536, and via the A523 from Leek. From the north, the main access to the town is the A523 from Manchester, Hazel Grove, and Poynton. The main west-east road is the A537 Knutsford to Buxton Road. At various points around the town center, some of these roads combine, such as the A537 / A523 on the Silk Road section, giving rise to traffic congestion, especially at peak times. The A538 provides access to Prestbury, Wilmslow, and Manchester Airport, with the B5470 being the only other eastbound route from the town, heading to Whaley Bridge and Chapel-en-le-Frith.

The census of 2011 showed there were over 52,000 people living in the area and the population has increased 3.9% in 10 years. 32.9% of households comprise of just one person with 36.2% of households having families. In the last 5 years alone there have been 6,210 new private homes built across the local/unitary authority of Cheshire East, which is an average of 1,242 per year. Currently, there are nearly 25,000 dwellings within the area with 15.8% of properties being flats with houses making up 84.3% of housing stock 70.5% of households own their own homes while 14% live in privately rented accommodation.

Education is also important for the 36.2% of households with families with 10 primary and secondary schools near to Macclesfield SK10 area rated ‘outstanding’ & ‘good’ with Ofsted.

Our team of estate agent experts can help you with your search for a new home in Macclesfield so do give them a call on 01625 839786. We can give independent no-obligation advice on mortgages, personal pensions, and more – get in touch with our financial services specialists today!. We’re here to help.