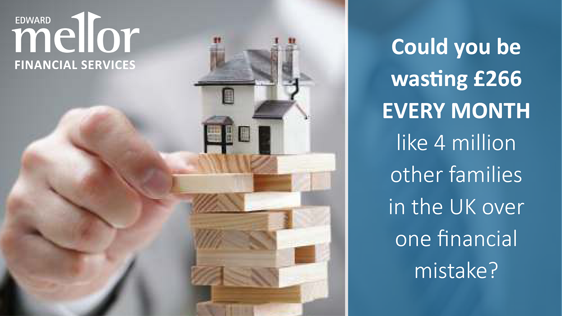 Are you wasting £266 EVERY MONTH like 4 million other families in the UK over a single mistake?

According to new figures released*, over a third of homeowners in the UK are currently sitting on the wrong mortgage deal – and it’s causing families to fork out an eye-watering £2.78 billion more a year than they should be paying.

Their figures found that over 4 million households are currently on a Standard Variable Rate mortgage (SVR) – the rate set by a mortgage lender after a borrower completes an introductory offer.

What this basically means is that if interest rates rise, then all 4 million customers could see their payments rise further, in line with their mortgage lender’s rates.

The investigation found that by switching to a better deal, UK homeowners can save an astounding £216 each month or over £2,500 annually.

A particularly worrying statistic is that over half (58%) of homeowners admit they’ve never re-mortgaged to save money, with a further 3.4 million households not even knowing the current interest rate of their mortgage!

Our head of financial services, Stephen Ridgway, made a comment on the recent findings saying that:

“It’s alarming to see so many people still on a Standard Variable Rate mortgage as essentially they’re not the most suitable rate available and above all, they’re definitely not the cheapest!”

“Seeing as over a third (36%) of homeowners are on their bank or building society’s standard variable rate, and 3.4 million people don’t even know their mortgage rate – The chances are they could potentially save hundreds or even thousands of pounds a year by re-mortgaging to a new deal.”

So how and when should you remortgage to make a saving?

Our expert mortgage advisors can take all the stress out of trying to remortgage by making sure we get the right deal for you, at the right price and at the right time.

We compare the latest deals of over 50+ high street and niche lenders giving you choice, options and solutions when it comes to funding your family home.